Both the world’s leading timber-certifying schemes – PEFC and FSC – have just withdrawn certification from timber originating from Russia or Belarus. Timber from these two countries may not be used in any PEFC or FSC-certified products.

We at Gilray Plant want to reassure our customers that all the timber used in the production of our scaffold boards is sourced from EU countries and our certification remains in place.

However, the illegal and aggressive actions of Russia will have an effect on the timber industry: both large timber-producing countries, Ukraine and Russia exported a combined figure of 5.5 million cubic metres of softwood lumber to Europe in 2021.

Europe received 1.114 million cubic metres of Ukrainian softwood lumber, which was sold to twenty-five European countries, according to UKRSTAT. This figure corresponds to a year-on-year increase of 1.7% from 2020.

Russia, meanwhile, exported 4.5 million cubic metres to Europe, which is one of the main markets for Russian softwood lumber. This market itself grew the Russian export by almost 20% compared to the figures a year earlier in 2020, according to Russian Customs Authorities.

The withdrawal of PEFC and FSC certification from Russian and Belarus lumber, together with UK and EU government sanctions against those countries will inevitably impact on the supply of timber, as will the war in Ukraine. Timber prices on the back of this will almost certainly rise and the availability of wood will become harder to source for UK companies.

But we at Gilray Plant feel that this is a minor price to pay, given that brave Ukrainians are fighting for their very right to exist as a sovereign nation.

Historically, scaffolding has been – and is still perceived to be – a male-dominated environment throughout companies in the UK.

Our colleague and Gilray Plant Limited company director Sarah Wilson, is one such professional in the scaffolding industry who has bucked the trend. She has not only played a leading role in the success and development of Gilray, but is also Vice Chair of the NASC Hire & Sale Committee.

Sarah has worked in the scaffolding industry for 24 years and has seen many changes in that time. She now heads this very well established company with fellow director Ralph Wilson and under their leadership, the company has grown steadily over the years with a reputation for great service, honesty and fairness.

On being asked what she enjoys about working in the industry, Sarah said she loves the entrepreneurial spirit of the scaffolding industry: the fact that anyone can attempt to build a business from scratch and therefore create employment and a family feel within a company. Her own experiences have mirrored this and created ties of loyalty and connection that have served both her and the business very well.

In regards to what advice she would give to other women looking to follow in her footsteps, Sarah would say to have faith in yourself and to make your own path through hard work and application.

Sarah is a role model for women looking to start a journey on a successful and rewarding career within the flourishing UK scaffolding industry, which epitomizes so much of the “can do” entrepreneurial spirit of this country. 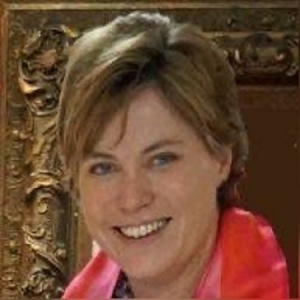 Gilray are pleased to announce that we have added 1 Tonne Gilray Sacks to our extensive product range.

Our new product range has been tried, tested and certified to a safe working load of 1,000 kgs and a safety factor of 5:1. 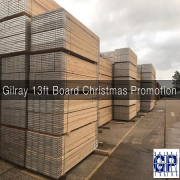 We are pleased to announce that Gilray Plant Ltd are currently running a 13ft Scaffold Board Christmas Promotional Offer.

The promotion is underway and will end on December 22nd, with all collections or deliveries concluded by that date.

Deliveries will be subject to your enquiry, so please do contact us by phone on 01322 442006  or email sales@gilray.co.uk for full details and to place your order.

From all of us at Gilray, we would like to wish you and your families a Happy Christmas and a very prosperous new year ! 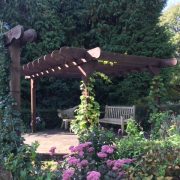 Reclaimed scaffold boards are perfect if you fancy taking on a creative new challenge and if you are looking to build a new piece of furniture or would like to add some authentic finishing touches to your home.

Other than just being used as a working platform, scaffold boards have a number of other uses. A simple search on Pinterest demonstrates some of the creative, aesthetically pleasing and cost-effective projects out there. From indoor projects including shelving and tables to outdoor projects including decking and flower beds, scaffold boards can be used in so many different ways.

END_OF_DOCUMENT_TOKEN_TO_BE_REPLACED

This site uses cookies. By continuing to browse the site, you are agreeing to our use of cookies.

We may request cookies to be set on your device. We use cookies to let us know when you visit our websites, how you interact with us, to enrich your user experience, and to customize your relationship with our website.

Click on the different category headings to find out more. You can also change some of your preferences. Note that blocking some types of cookies may impact your experience on our websites and the services we are able to offer.

These cookies are strictly necessary to provide you with services available through our website and to use some of its features.

Because these cookies are strictly necessary to deliver the website, refuseing them will have impact how our site functions. You always can block or delete cookies by changing your browser settings and force blocking all cookies on this website. But this will always prompt you to accept/refuse cookies when revisiting our site.

We fully respect if you want to refuse cookies but to avoid asking you again and again kindly allow us to store a cookie for that. You are free to opt out any time or opt in for other cookies to get a better experience. If you refuse cookies we will remove all set cookies in our domain.

We provide you with a list of stored cookies on your computer in our domain so you can check what we stored. Due to security reasons we are not able to show or modify cookies from other domains. You can check these in your browser security settings.

These cookies collect information that is used either in aggregate form to help us understand how our website is being used or how effective our marketing campaigns are, or to help us customize our website and application for you in order to enhance your experience.

If you do not want that we track your visit to our site you can disable tracking in your browser here:

We also use different external services like Google Webfonts, Google Maps, and external Video providers. Since these providers may collect personal data like your IP address we allow you to block them here. Please be aware that this might heavily reduce the functionality and appearance of our site. Changes will take effect once you reload the page.

The following cookies are also needed - You can choose if you want to allow them: